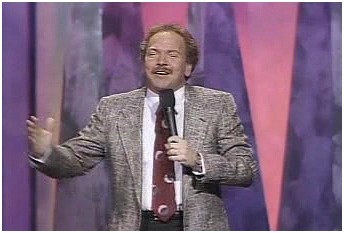 [Please Click On Jukebox Pleyer Bar Below To View Titles]

To hear more great material from this outstanding comic,
find Dennis Wolfberg at CyberJaz.com  and  DVDEmpire.com


Dennis Wolfberg, the stand-up comedian who played the "little guy with bad breath" Gooshie, died of cancer on Monday, October 3, 1994. The following is his obituary as it appeared in Daily Variety.

Dennis Wolfberg, 48, whose facial contortions and slice-of-life standup style brought him wide recognition on the national comedy ciruit, died of cancer Monday at his home in Culver City.

Wolfberg became a fixture on "The Tonight Show" and starred in an HBO special in early 1992. He also had a recurring role as a strange scientist on NBC's "Quantum Leap," and in April 1993 "Entertainment Tonight" aired "A Day in the Life of Dennis Wolfberg," focusing on his relentless touring schedule.

Born in Long Island, N.Y., Wolfberg taught sixth-grade students for 12 years in the South Bronx before leaving for a full-time comedy career in 1979. Though he battled cancer for at least two years, he continued to work through the end of August. At the time of his death, he was negotiating a deal for his own TV show.

Wolfberg is survived by his wife, Jeannie, who's also a comic, and three sons.

A service will be held at 11 a.m. Wednesday at Hillside Memorial Cememtary. 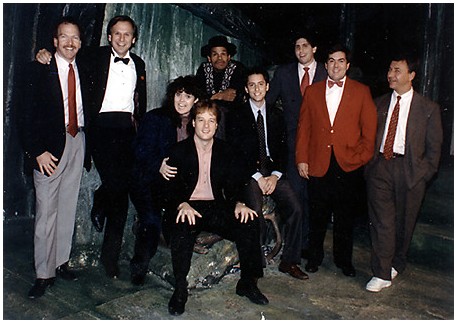 A very funny comedian who passed away far too soon!